How does Gearset compare with change sets?

Many admins and developers still manage Salesforce deployments using change sets, the platform-native tooling with no upfront costs. But deploying with change sets is a painful process that unnecessarily wastes these Salesforce professionals' time and talent.

Here's the short version of how Gearset's deployment tool compares to change sets:

Let's take a closer look at each of these differences between Gearset and change sets, and see why ever more high-performing Salesforce teams have left change sets behind.

Deployments up to 12x faster

Deployments with change sets are a time sink. Each deployment involves a slow, manual and error-prone process: selecting metadata changes one by one from dropdowns, uploading outbound change sets, waiting, logging in and out of source and target orgs, validating inbound change sets, waiting again, and finally deploying. All this takes up valuable time. Frustratingly often, the change set doesn't deploy successfully, which means considerably more time has to be spent on troubleshooting and trying again until it works.

As orgs grow in size and complexity, using change sets for deployments just takes longer and longer. A good example of this is Zillow, the online real estate platform, which had deployments that were taking up to 12 hours with change sets! After switching to Gearset, Zillow brought those deployment times down to just 1 hour.

Complete visibility into every deployment

Another significant problem with change sets is the lack of visibility. Selecting a few basic changes for deployment might not be too tricky, but working out what you need to deploy for anything more substantial can be a real headache.

Gearset, by contrast, compares the metadata in your source and target environments and helps you to pick the right items for deployment by showing you what's been added, changed, or deleted in the source org. The top half of Gearset's comparison results page (shown below) lists those differences, and the bottom half of the page shows you the exact difference between source and target for each of those items. 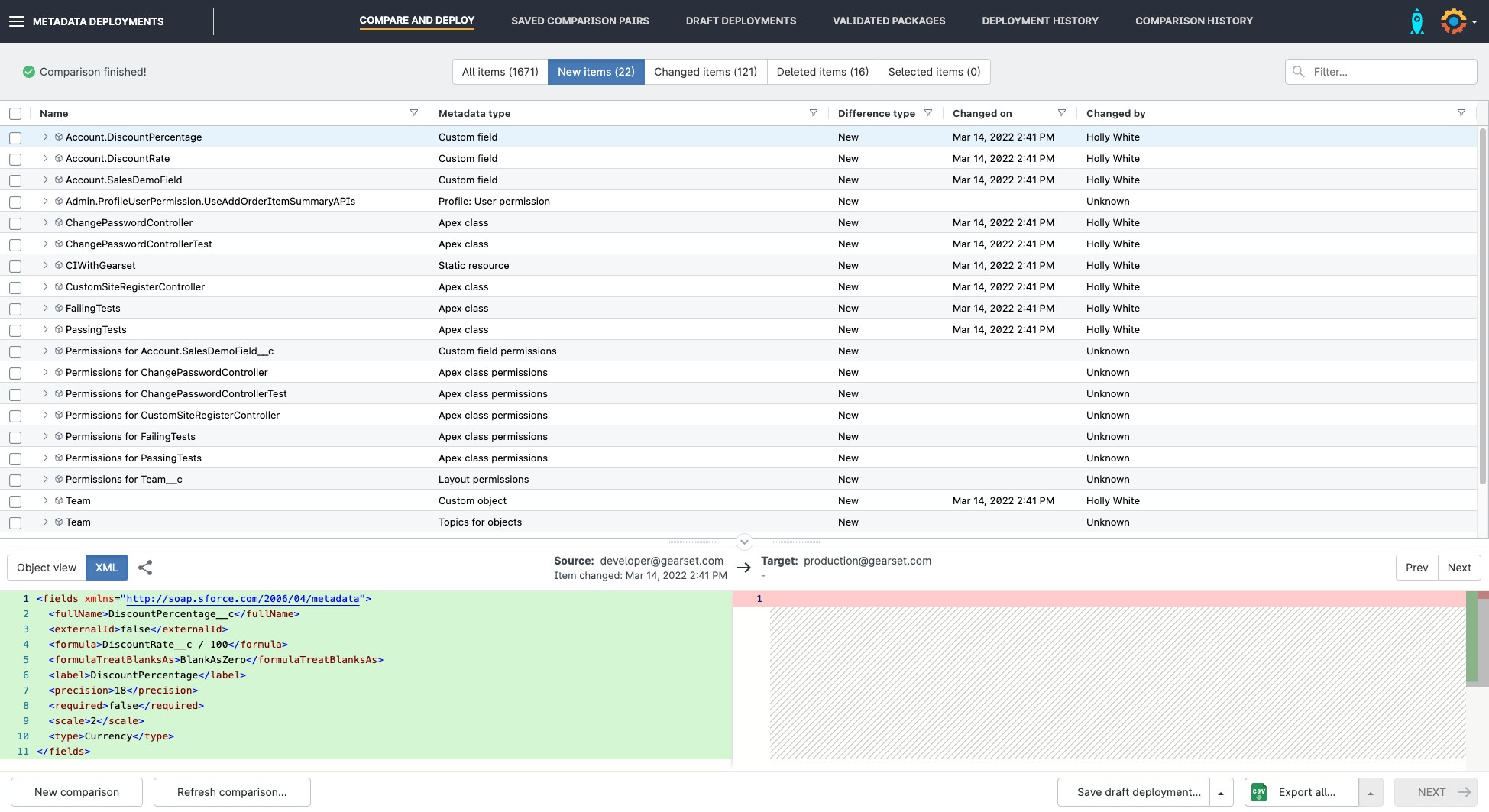 To understand the metadata differences between your environments and to find your changes more easily, try using these handy features on this page:

Gearset also keeps a full history of your deployments, so you have a complete audit trail that explains exactly what was deployed, when, and why. And you can download a PDF report for any deployment.

All of these features are why Matt Norn, Cloud Technologist at Salesforce Consultancy Traction on Demand, describes Gearset as a 'black light' that shows everything you need to see during deployments. This level of visibility is in stark contrast with change sets, which Matt remembers caused 'a lot of hair-pulling, a lot of screaming, and a lot of crying'.

How often do your deployments work on the first attempt? There are all sorts of Salesforce quirks that make deployments fail, but Gearset actively solves them with its intelligent deployment engine. This was our goal from when we first set out to build Gearset: to create a tool that makes sure your Salesforce deployments work first time, every time.

Gearset has been used to run well over 6 million deployments with 64 million items of metadata. That's given us a deep insight into the common causes of deployment failure, and enabled our brilliant engineering team to build scores of 'problem analyzers' that help you avoid deployment failure. Gearset automatically analyzes your deployment packages and checks you're happy with any recommended fixes, such as adding in any missing dependencies. Thanks to Gearset's problem analyzers, the average deployment success rate across all of our users is consistently above 90%.

Gearset empowers you to run more sophisticated Salesforce deployments than you can with change sets. By selecting metadata changes at a much more granular level, you won't deploy more than you need to - something that's especially useful when deploying changes to profiles and permission sets.

It's also essential to be able to delete metadata safely as part of ongoing org maintenance. Never deleting anything leads to org bloat and technical debt, which make your org slower and more susceptible to issues and breakages - especially when it comes to automated processes such as flows. Deleting things directly in production isn't safe. You should delete obsolete features in a sandbox org, make sure there are no unintended consequences, and then deploy those deletions. Here's the snag: you can't use change sets to deploy deletions. But with Gearset they're as easy as deploying new and changed items.

Instant rollback of any deployment

Releases often feel like crunch time. Will your changes work properly in production? Will they meet the requirements of your users? Or, in a worst-case scenario, will they break something else? There's no way to roll back a change set. In the event of failure, you have to go into production and manually delete your changes, which is far from ideal.

Gearset's customers value the peace of mind they get knowing that they can roll back any deployment. Billie, a cutting-edge FinTech startup, immediately recognized the need for something more powerful than change sets. Rollback was an important capability that Billie's Co-Founder Igor Chtivelband wanted to have, guaranteeing a way of reverting deployments with just a couple of clicks and restoring business as usual within 10 minutes.

Only the most basic release management process can be managed using change sets - perhaps a small team or solo admin deploying from a sandbox to production. Companies soon outgrow this model of development and deployment. As they bring in more admins and developers, it soon becomes necessary to add more sandboxes and testing environments. This is best done by assembling a pipeline, where the same changes are deployed from environment to environment until they're released to production.

Short release windows are another common problem for teams using change sets. Given the uncertainties of releasing with change sets, it's common for teams to release outside of working hours to avoid disruption. You might, for example, release at midnight every Friday. As a result, teams using change sets have to stay up late on a Friday building the change set, and then often spend the weekend fixing problems that arise.

Gearset is transformative for teams that have to deploy within tight release windows. Deployment packages can be validated well ahead of time and then scheduled for release. That way, you can be confident that your release can be deployed successfully because it's been validated against Salesforce's metadata API. A notification by text or email will confirm that the release has been successful. And you get your weekend back!

The gateway to DevOps

Taking a longer view for Salesforce teams and their companies, perhaps the most significant limitation of a release management process built around change sets is that it cannot be scaled up. Change sets can be bad enough for a solo admin, but it's impossible to use for a team of any size - they'll soon start overwriting each other's changes. And the truth is, no deployment tool can solve that problem. The sustainable solution has to be DevOps for Salesforce: a rapid, iterative approach to releases, where deployments are embraced as a useful part of the process rather than seen as a hindrance. Using automated workflows built around version control for easy collaboration, teams can ship small, fast and often.

While DevOps can sound intimidating at first, the reality is that Gearset removes the barriers to DevOps adoption. Once you've begun using Gearset, you'll soon find deployments a breeze. And the good news is that you can deploy to and from version control in Gearset using exactly the same process as org-to-org deployments - no need for Git commands or the CLI. In fact, you can set up an entire DevOps workflow all within Gearset's UI. In other words, you can do DevOps with clicks not code.

How much easier will your deployments be with Gearset?

If you're a no-code or low-code Salesforce admin or developer, don't settle for change sets. Gearset is easier to use and empowers you to do so much more. Begin your free trial today and join the thousands of Gearset users who have discovered deployment success. You can also download our helpful factsheet on Gearset vs. change sets and share it with your team.