How to temporarily disable continuous integration jobs in Gearset

With our latest release, we've now added the ability to pause a currently active CI job. Disabling a CI job may seem a little counter intuitive, but does make sense for certain scenarios. Firstly, you may not want a CI job to start deploying changes at the same time as hotfixes or ad-hoc changes to the same target org are taking place. To help prevent potential conflicts, the CI job can now be paused, the ad-hoc changes can be safely deployed to production and the CI job can be reactivated when safe to do so. Alternatively, you may want to simply set up the CI job in advance, but not have it run until other parts of the overall process have been completed.

For anyone unfamiliar with Gearset's CI functionality, it only takes a few moments to put in place, and begins with creating a new CI job.

Creating a CI job in Gearset: 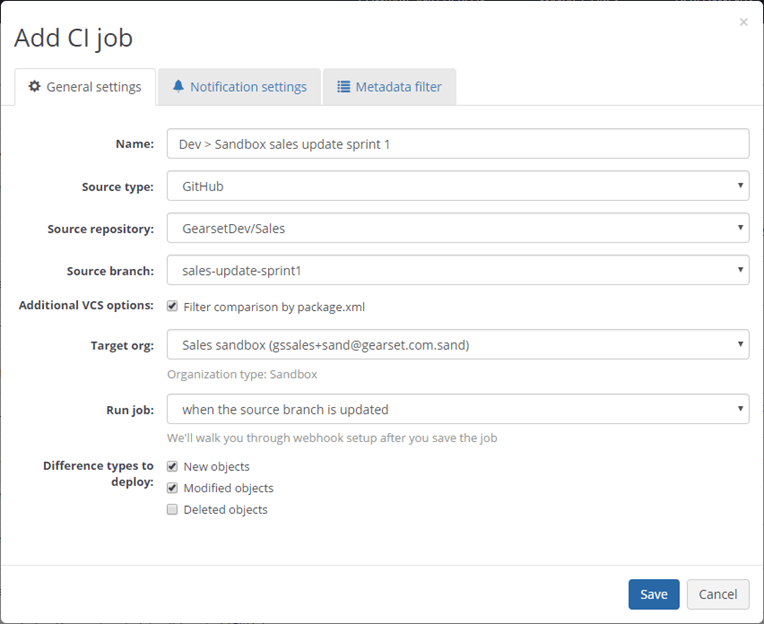 Note: our CI feature also enables you to include only specific metadata types, as well as the nature of the changes to be deployed (e.g. new, changed and/or deleted items). You can also choose to ignore any existing package.xml file that exists in the repo.

Gearset displays all current CI jobs from the jobs overview page. This enables a quick and easy way to look back at changes deployed for each CI job run, whether triggered every four hours or when a branch was updated.

From the currently created jobs, we've now added an additional action that lets you simply toggle the current status for any CI job that you are the owner of (i.e. you created the job). You can choose to disable the job at any time, and then re-enable the CI job again when ready.

Note: you cannot disable a CI job for which you are not the owner. If you're part of a team in Gearset, you will need to contact the person who originally created the CI job and ask them to disable it.

We really hope you find the addition useful - if we're missing something that you'd like to see, then just pop a suggestion on our feedback forum, or fire us an email!