The Salesforce Admin's guide to git

Git has taken over the world in the past few years and for many, terms like version control, git and GitHub have become synonyms. This post digs into the jargon and sheds light on how #AwesomeAdmins that don’t currently source control their work can start to realise the benefits.

Assuming no prior knowledge, let’s start by defining some terms:

What benefits does source control provide?

Adopting source control as a team makes it easier to work together and share changes between Salesforce environments. Working together in teams has traditionally been a bit of a pain and it's been too easy to lose track of what changes need to be migrated or to step on each others toes.

Services like Gearset have made this much better by enabling easy comparison and deployment between Salesforce environments, but in spite of this it’s still more challenging with Salesforce than traditional software platforms to identify changes and track them over time. The big benefits that source control provide are:

Adopting this process makes it very easy to go back in time and understand why things have been configured in a certain way and who knows most about each part of the system.

The reason that most Salesforce projects haven’t typically used source control is because getting your Salesforce configuration, code and metadata into text form so it can be version controlled has traditionally been a pain. And whilst getting configuration changes into source control might have been difficult, getting changes back out of source control and applied to your orgs was so difficult as to be almost impossible.

With SalesforceDX, Salesforce have started work that will make this process easier. For now, the focus of that project is more on Salesforce Coders than Salesforce Admins and requires command line tools that have a steep learning curve.

Git and Salesforce, the traditional way

Traditionally, using git and Salesforce together meant using some combintation of the git command line tool and the Force.com Migration Tool. E.g. 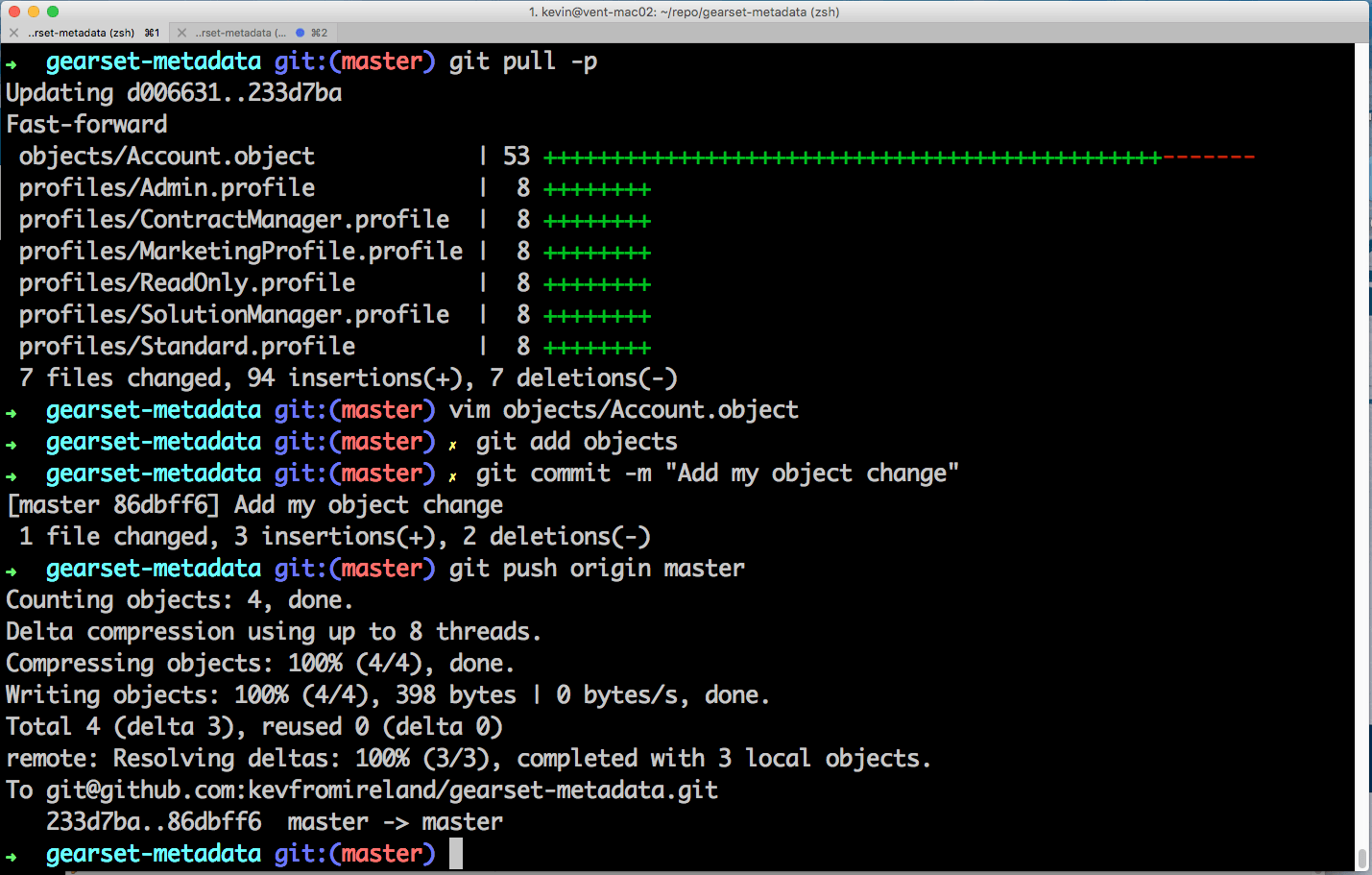 This kind of workflow isn’t exactly a simple way to share changes with your team, and for anyone unfamiliar with the command line tool there's a lot to learn. Luckily, the great thing about source control is that it doesn't matter how you get your changes into the system. Changes can be pushed via the command line, or a tool such as Gearset, and once they're in, the whole team can easily collaborate.

Gearset is all about making it easy to understand the differences between Salesforce environments. To us, source control is just another source of metadata which can be compared and deployed. Gearset allows you to compare source controlled repositories with each other, compare an org with source control to push changes, or compare source control with your org to pull changes. All of this is done through the app, without the use of a command line tool.

Here is how you share changes with your team via source control, using Gearset

For your teammate to get this change, they can either use the command line to pull from source control or use Gearset to select the git repository as the source of the comparison and their salesforce org as the target.

Gearset makes it easy to collaborate with each other using the source control system regardless of how everyone on the team likes to work: be it coders using the command line tools or admins using a nice UI. Combining the traditionally separated developer and admin workflows provides a range of benefits, including faster project delivery, better visibility into what separate teams and working on, and reducing the chance of accidentally overwriting work.

Click here to get started using Gearset and experience git the easy way.