Validate your deployments ahead of time with Gearset

When you’ve got a crucial deployment to make or a narrow release window, the last thing you want to spend valuable time on is picking apart why a deployment failed or rebuilding the package on the fly. One way around this is to check ahead of time that your deployment package will successfully deploy. The deployment can then be swiftly promoted on demand, safe in the knowledge that the tests have passed and you haven’t missed any crucial dependencies. We call these validated packages, and they're a great way to reduce deployment failures and make release day that little bit less stressful.

Today we launched the first stage of support for validated packages: Gearset now allows you to create and validate your deployment package without actually running a deployment. You can then come back later to kick off the deployment, knowing that everything has already been tested.

As with all our new features, we've got plans to build on the core functionality in the coming months, with great new additions such as scheduled deployments and the ability to save a history of all validated packages as an audit trail.

Creating a validated package with Gearset

To create a validated package, simply run a comparison, choose the objects you want to deploy, and select Validate deployment. Gearset will then automatically simulate a deployment to your selected org and create the validated package for you. Nothing will be deployed to your org at this stage. If anything goes wrong - for example, the simulated deployment fails or tests don’t pass - we’ll show you exactly what happened so you can fix it. 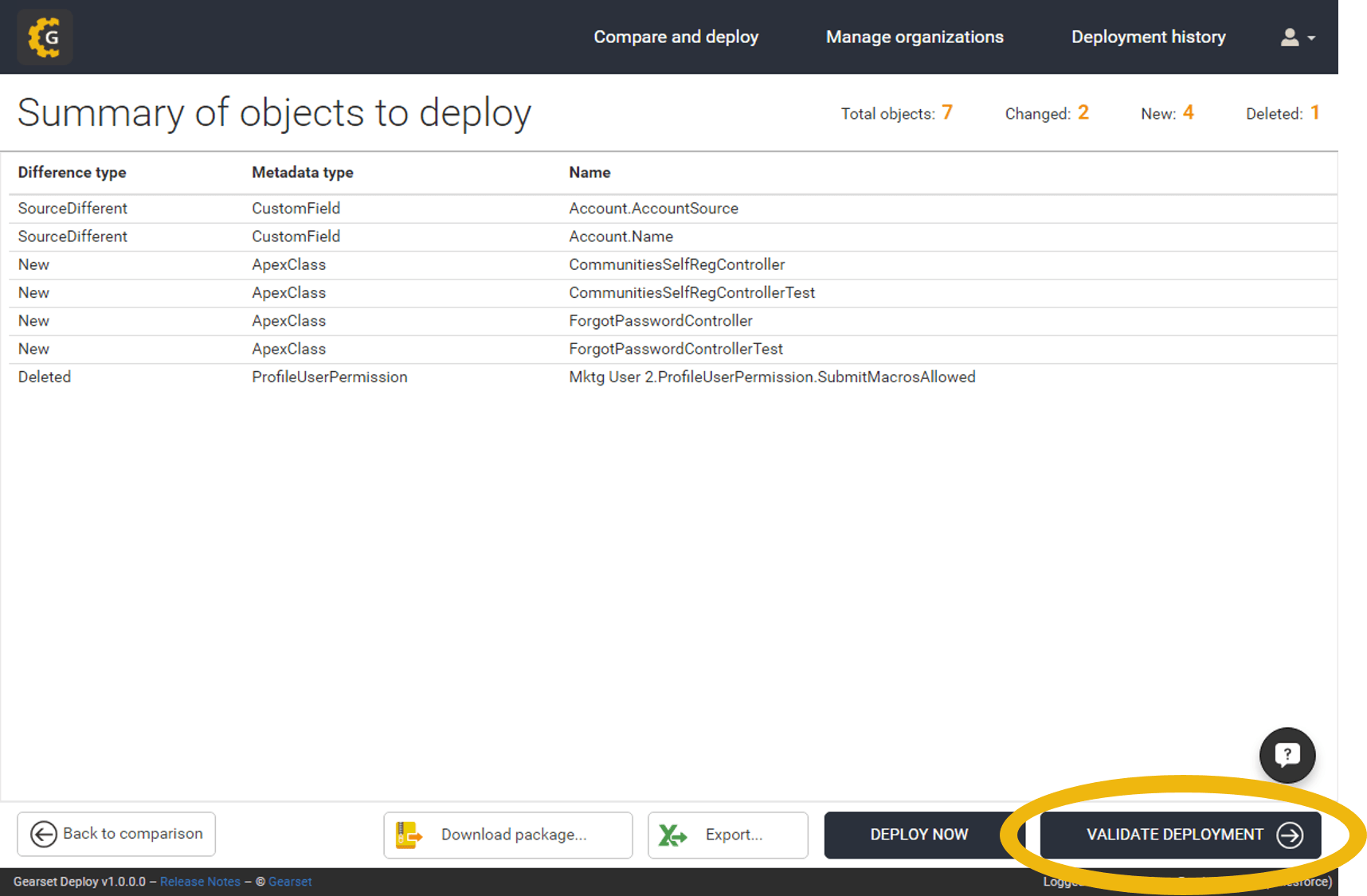 Deploying a validated package with Gearset

Once validation is complete, we’ll save the package and you can kick off a deployment at a later date. There are currently two options for how to deploy a validated package, and we’re actively working on improving this workflow.

Option 1: Deploy the validated package straight away by clicking Deploy now. This is ideal if you want to validate immediately before starting a deployment.

Option 2: Deploy the validated package at a later date. Copy the full URL of the page from your browser, then use it to return to the package later. This is perfect for validating a package a couple of days ahead of a big deployment. We know copying and pasting URLs isn't an ideal workflow, but we’ve had so many requests for this feature that we wanted to offer it sooner rather than later!

More features on the way

This is just the first step in our support for validated packages. In the coming months, we’ll be releasing the ability to schedule the deployment of a package so you don’t have to be there to kick it off. We’ll also store your validated packages in your deployment history to help with auditing and record-keeping. Additional support for testing and re-validation is also on the cards.

With validated package support, you’ll be able to create and test your deployment on a Thursday and kick it off on Friday evening with just a click. Not only will you not have to be in the office to kick it off, but you’ll be safe in the knowledge that all tests have passed and the chance of a failure is minimal. It’s just another way in which Gearset simplifies deployments.

If you’re following our product roadmap, you’ll notice that validated packages is another of the features that we’re delivering on schedule.

A word of caution

Gearset-validated packages don’t currently expire, but they don't refresh automatically either. If you validate a package a long time before you intend to deploy, there’s a chance that your target org will have been modified by the time the deployment is kicked off. This can mean that the deployment could fail, as the goalposts have moved since validation.

As a rule of thumb, we don’t recommend you validate a package more than a week before the intended deployment, and always keep track of any changes by running a quick comparison before starting the deployment. If you’re not sure, you can always create a new validated package in a few clicks.

As always, we'd love to get your feedback. Visit our feedback forum to add your comments and suggestions, or drop us an email at [email protected] and give us your thoughts!